Humongous Entertainment steps up to the plate with another release in its sports series and hits a home run. With original animation, a delicate mix of Major and Little League rules, and kid versions of Major League Baseball heroes, Backyard Baseball 2001 is an excellent sports title for kids. A lighthearted feeling of a pick-up game combined with simple controls and fun power-ups will draw kids in for the long haul as they bat their way to a world series championship under a real life team name like the Reds or a name all their own.

For kids (and grownups) who know anything about baseball, they can delight in choosing a roster of a baseball greats such as Sammy Sosa, Mark McGwire, Randy Johnson, and Ken Griffey Jr. just to name a few. Their sweetly animated kid-versions can be combined with the Backyard Sports series regulars, or users can comprise a team of all superstars. Whatever players are left behind after assembling a team will be placed on the opposing team, which is nice since generic computer opposition is avoided. Mixing up the characters provides the most fun, and creates the best teams since only a few pro pitchers are available. Once a team is chosen, players can designate the batting lineup and their outfield positions. Single games and series games are both options, and many other features can be customized such as choosing if the game should be six or nine innings. Younger players can customize the controls and strike zone as well as play with a tee, while more experienced PC armchair athletes can turn off the pitch locator and select the hard setting for a more challenging game. Hardcore PC sports fans however, may not like this game because of its simplicity.

Regardless of chosen settings, the games play out much like any baseball game minus any poor sportsmanship. Batters can bunt, steal bases, but cannot hit the batter with a pitch. Depending on the sound control settings, players will hear a lot of chatter and off the wall commentary. A few choice phrases such as 'we want a batter, not a broken ladder,' are mostly humorous, but the repetitive chanting could potentially grate the nerves of some adults. In fairness, all the silly incantations are perfectly inline with an adolescent baseball game, and can actually be very funny. Both the batting and pitching power-ups add to the overall good time most players will already be having. Pitching power-ups are earned with every strike out, and it's not an impossible feat. The fireball is the best pitch to throw, but since it costs the pitcher's entire juice box stamina it should be used wisely. Strategically, the power-ups alter the game only slightly. In other words, you can still win without them; yet certainly add to the fun. In addition to these added 'bonuses,' the game boasts possibly the easiest controls of any Backyard Sport to date. Though it supports a gamepad, a good working mouse will suffice. The large arrow icons pointing the way to navigating the game are also simple for kids to use.

Backyard Baseball 2001 is a great selection for young sports fans. Being the first title to feature child versions of real life players, it relates to kids and appeals to their interest in the sport. The game has plenty of fun and kid-friendly features and is definitely one of the better sports titles for children. It wouldn't be a seventh inning stretch to say most kids will want to play over and over. 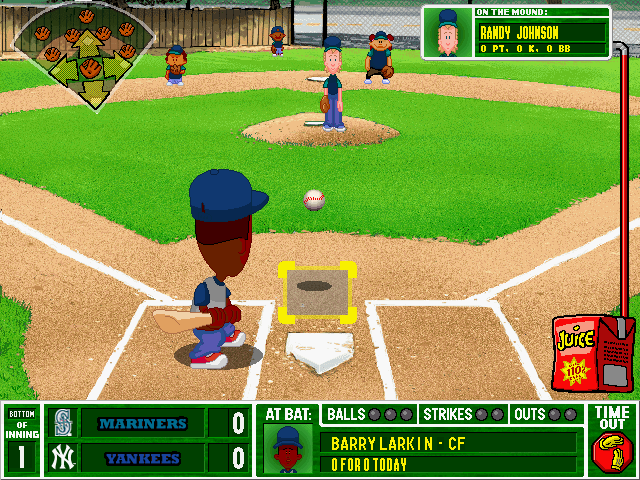